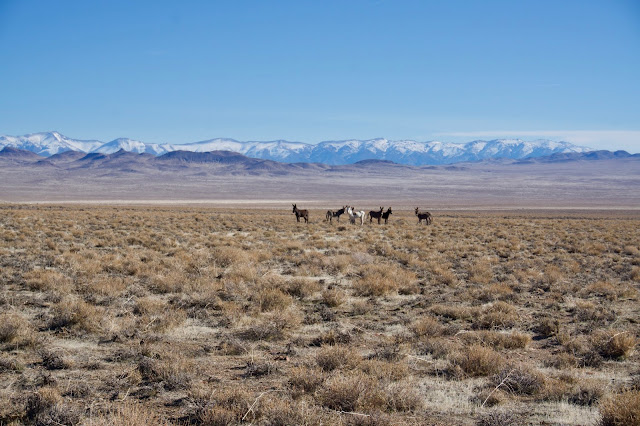 Jan 2021
Recently I had joined the Facebook bikepacking group, BurritoPackingNV. Since September they had been organizing a monthly outing...successfully. I threw out a route for the January outing and it was immediately adopted for the monthly adventure.
We met up in the old town site of Vernon. I went out the night before and had a nice evening by the campfire. In the morning we introduced ourselves to each other while packing our bikes. And then we were off! First stop, Tunnel Camp. 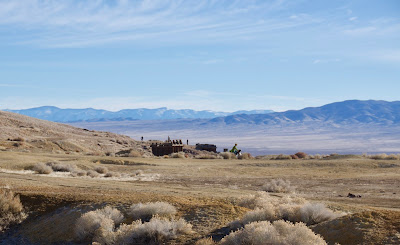 Tunnel Camp was started to build a cyanide mill and dig a tunnel to help drain water from the mines at Seven Troughs. It eventually was doomed to failure and joined the ranks of the many abandoned towns and camps of Nevada's mining past.
After exploring the remains of Tunnel Camp we pushed on to the old town site of Seven Troughs. Founded in 1906, the town thrived and by 1907 boasted a post office, hotel and multiple saloons with a population of 350. By 1918 the town had declined to a few local miners and the post office had closed up. Over 2 million dollars in gold had been produced in its short life. Not much is left here but with a bit of imagination you can easily envision the bustling town of the past.

From Seven Troughs we rode north along the edge of the Seven Troughs Range before dropping to the valley floor and riding up through Rocky Canyon. This area was full of antelope, burro's and wild horses. Literally many dozens and perhaps hundreds of burro's and as many antelope. At one point our riding group was split slightly and a large herd of antelope ran across the route between our groups. Quite a sight! From the crest we made a fast descent down to the site of Placerites. First discovered in 1870, gravels were hauled to Rabbithole Springs NW of the site to wash until water was brought in from Cow Creek in 1890. Operations remained small scale until 1929 when Newmont Mining Company acquired 4000 acres. They built large dredge ponds and brought in a dragline scrapper to mine the placers. By 1942 all operations had ceased.
By now it was closing in on 3pm and with short winter days we were still about an hour or more from our planned camp at Judges Spring. After leaving Placerites with a decent dirt road, the climb up to the springs consisted of one of those 'barely there' desert 2 tracks. In fact we initially missed the turn because we didn't see any route. Climbing the 700 ft up to the springs we all arrived after sunset but before dark. Success in anyone's book! The area around the spring was pretty swampy so Kurstin managed to find us a good camp on the knob just above the springs. By the time tents (Christine, KC and Nick toughed it with bivies) were set set up, dinner's cooked and consumed it was pretty much time to call it a day.
Despite the morning chill we were all awake and packing up at a reasonable time. I went down and knocked some ice off the spring and filtered a liter of water. Today was going to be a little easier except that the biggest climb was at the end of the day. The riding was on good roads with one exception of another short barely there muddy 2 track. We stopped to admire a wildlife guzzler (water collection system for wildlife) sponsored by hunters. As far as wildlife goes, today's ride was very different from the previous day. Whereas yesterday there had been abundant antelope, burro's and even wild horses, today we saw only one lonely burro. We had looped around the range and were now on the west side of the range riding southward. This side of the range also had no mining camps to explore. We did however stop to check out Porter Springs.
Porter Springs has recently been developed by the BLM and has a long history of usage by both Native Americans to 20th century miners who lived onsite and milled tungsten from the nearby mine.  It is a fantastic oasis in an otherwise dry somewhat barren desert landscape.
From Porter Springs it was just a matter of climbing the remaining 900 ft to the crest of the range and a fast screaming downhill back to our vehicles at Vernon. Popsicle's and chocolate chips cookies were handed out by KC and Nick respectively. (Nick is owner/builder at Maverick Cycles in Reno and was recently featured in Bikepacking.com) My thanks to Kurstin for bringing us together, and Shay, Kurstin, Christine, KC, and Nick for being great riding companions! All in all a great trip with a fun group! And BTW, if you've made it this far and you're interested in this period of Nevada history, I highly recommend the book "Nevada Ghost Towns and Mining Camps" by Stanley W Paher. Excellent resource!! 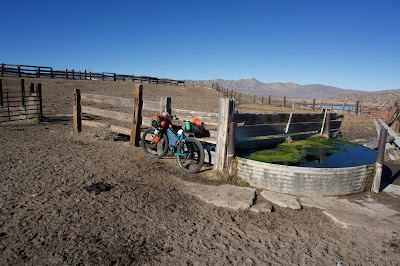 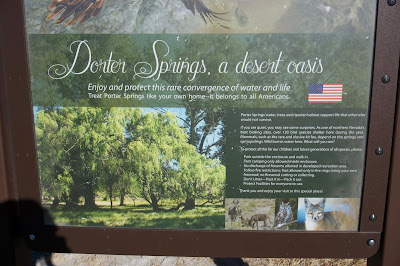 Posted by Doug A